Both of us have been well this year, particularly Pauline with no relapse of her ulcerative colitis. We’ve had our Covid jabs and booster.

The year started off with optimism, looking forward to previously postponed holidays to Japan in September, and Sicily in October.

In June I damaged my Achilles tendon and have suffered ever since with foot problems in both feet. Under a podiatrist for a month now, but no improvement….yet. Pauline now walks faster than me!

Many trips away organised and taken this year, a pub just outside Canterbury in May, a hotel on Ipswich Marina in June, Jersey for a week at the end of June, Wroxham on the Norfolk Broads at the end of July, Salisbury in early September. Dartmouth at the end of September, staying in an apartment on the harbour, it turned out to a good choice in exchange for the Japan trip that had now been cancelled. It was packed out everywhere in Devon

Still Sicily to look forward to though.

Unfortunately, after going through all the rigmarole of testing etc; for foreign travel, I literally cocked it up at the departure gate!

Maybe I’ll tell you the story one day!

A consolation three night stay in Chester last month proved very good; we recommend the Pied Bull in the town centre for a B&B.

This year we have goose and loads of booze

I thought I would regret shifting 850kg of decorative stone in a couple of hours on Friday afternoon, prior to my attending a charity fishing match on the Saturday.
As it stood, after a long hot soak in the bath I felt pretty good, but tired.
After falling asleep on the settee, I decided that it was bed time....9pm, 3 hours before my normal time.
Hit the sack, and slept up until 1am, I needed a pee, and then fitfully until 5.20am, just before the alarm. My guess is it was anticipation of the day to come that disturbed my sleep.

The match was at the Alders Farm complex, Great Brickhill, near Milton Keynes, and was in aid of the Willen Hospice. It is commemorating my old fishing pal, John Tipple's death from a brain tumour some 15 years ago.
Arriving at the venue at 7.15am just a bit earlier than the rest of the participants. and eagerly awaiting the Full English, the first disapointment was that breakfast would only be an egg and bacon sandwich!
I have to say it was probably the only disapointment,although it was very good, well apart from the fact that it drizzled down with rain from 10:30, the soaking through kind, and I was unprepared, clothing wise, not even a hat!
After all the intoduction we paid  for our day tickets, and our "breakfast in" the on-site shop.
It was there I learned that I needed two keepnets, I had one, close to being thrown out, as I don't use a keep net generally, and the connecter on the top had broken, so not ideal for holding itself open to receive the catch.
So bought a new one for £40, as it turned out, it wasn't my only unforseen expense of the day!
And so to fish, 10 of us all old friends of John.
The walk to the lake was quite a distance, especially for us, well me, not expecting it, down a ridged steep mud slope, and around the back of another lake. It took me a few hits at making the journey arriving at the draw totally knackered after relaying my tackle from a partial drop off point, and stopping to pull up my trousers and to get my breath back.
I learned that I was the eldest, and at close approaching 70, I have to say my much younger fishing companions were not being very charitable to me.
Anyway, we started at 9:45, I had a common carp first bite, comments from adjacent pegs, of  "oy you better not keep that up" the fish was about 5 pound and I bounced it off the old net.
1-0 to the fish.
I'd  made up a few fish after making sure that the new keepnet was for carp, and silvers in the old net, dropped one more on the net ,which was probably 6 lb plus but continued catching , mostly on worm, carp, tiny perch and one bream.
Then disappointment started to get to me, as the drizzle carried on relentlessly, my hands were wet, and knot tying became a problem, and when will they develope a split shot that doesn't come off with every decent fish, or crimps the line badly if it's bitten on tighter. ...Come on Mr Dinsmore!
To cap it all my polorised prescription glasses fell off my legs in to the murky depths of the swim. Before anybody asks "what were they doing on your legs", I can't see to tie hooks with them on, they are for distance!
The unforseen expense hinted at earlier.
So, it was 1:30pm, I'd had enough, and was dreading the uphill walk back, so I packed all my sopping wet gear, and left the nets in the water for the 2:30pm weigh in.
It was even worse going back, and after a few stops to pull my shower sodden  trousers up, and take a breather I made it back to the car...totally knackered.
So after a slow change from my soaked jacket,shirt and plimsolls, back down for the weigh in, in the coat and boots I should have been wearing from the start.

The top weight was close to 178lbs, followed by a 90lb, net.
My result doesn't matter, but I had at least two of the ten weigh in less than me, but we all weighed in.

My raffle tickets were pulled out 3 times, so I have a bottle of Bollinger, and some Latvian cherry brandy, which I may experiment with later.The third, I gave away.
All in all, a good day £300 raised for Willen Hospice, plus some topping up to come from the organiser Paul Scripps employers, Mercedes of Milton Keynes.

I suppose I learned two things about the day, the first be more organised about my tackle, and make my life easier for the unexpected, and the second that my heart must still be pretty good, even if the body isn't after two days of hard graft!
.
See you next time

After a fairly long lay off from fishing, I decided that to get back into it, another holiday was needed.

We booked a week in the Norfolk Broads at Potter Heigham in a cottage beside the River Thurne.
The cottage was excellent with all the equipment needed for a home from home stay.
We booked through https://www.riverside-holidays.co.uk/wp-content/uploads/2018/01/MAIN-PAGE-DOC-2018-without-bleed.pdf  and stayed in the Haven.
It will sleep 6, at a squeeze, but was very comfortable, and roomy, for the two of us.

I had decided beforehand that I wasn't interested in skimmers, I was determined to try and just catch roach.
Fishing was to bewith no groundbait, just loose feeding with a bucket of hempseed, and casters from my freezer.
No maggots!
I bought half a kilo of dendrobaener from Worms Direct, and for a test, some of their "worm enzyme concentrate"
After the drive of about just over 2 hours we arrived, collected the keys, and paid to park for the week.
Quite conveniently, there was an old boy offering a "river taxi" service down to the cottage for £10, so all our baggage and my tackle was loaded on board and off we trundled, under the bridge and down to the cottage. It was stated that this was no more than 600 yards, I think it was more, judging by our 10 minute daily walk there and back to the village. 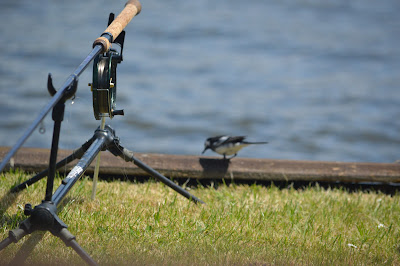 So, the first few hours after arrival on the bank, were getting the method right, fishing with worm as bait, and droppering hemp and casters doused in the "enzyme" along the run.
I thought I had the method right, as I started to hook into perch, roach and.....skimmers.
Then as it was beginning to get darker...eels! 3 on the trot up to 2lb ish.
Decision made, don't fish with worm in the early evening, so, to the cottage patio for a few drinks before bed.
For the next six days, I fished firstly from the crack of dawn, and later.... a little later, and then back again in the afternoon/evening for a few hours.
Fishing mainly with sweetcorn as bait, fortunately the roach took this bait better than the skimmers, so I carried on using it, with the occasional switch to worm when all went quiet.
My best roach was 22ozs. Roach were by far the most obliging, only one true bronze bream of around two pound, and perch upto a pound on the worm.
I should say, that my 2nd bucket of hemp/caster mix without the "enzyme" didn't bring me the bigger perch, so perhaps it deserves another try?
I  fished with worms again in the early evening, on my last evening. Who is it stating that eels are endangered?
I couldn't stop catching them, one after the other in my 30 yard stretch of river. 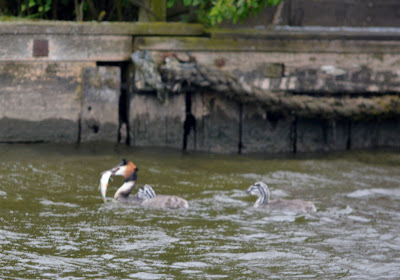 All in all, a fine return to my fishing experience.

Beer
When not fishing, we were sightseeing, having never been to The Broads before, timing our journeys to coincide with the appearance of a real ale pub for a lunch stop! All pre planned...of course!
Of those we tried, including the Woodfordes Brewery and pub, our best experience was at the
http://thewhitehorseinnneatishead.com/ , an excellent selection of beer, and very good pub grub. 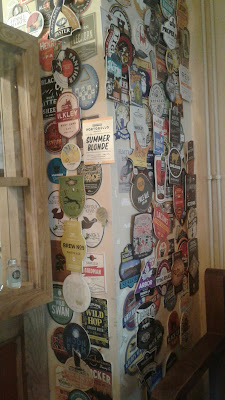 All in one place

My articles for Fishing Magic